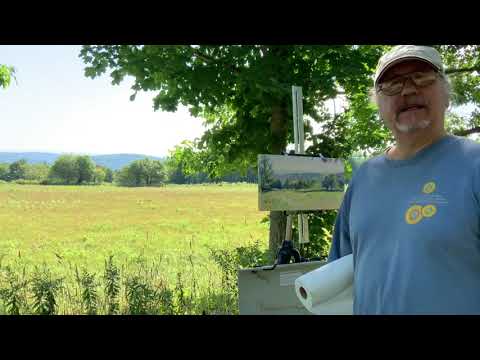 In the span of the last 20+ years, Robert Masla’s painting has shifted to focus primarily on the landscape. Working to uncover the universal language contained within the natural world, Masla portrays what he terms “Spiritrealism.” He coined the term in the 1970’s to describe how the spiritual can manifest itself in the so-called “mundane” realities of everyday life. His definition of Spiritrealism has evolved conjointly with his art over the years, from concrete & clearly defined to the more ambiguous and universal.

For Masla, Spiritrealism is a way of life. The artist achieves his goals in painting through the suggestion of other worldly experiences, so the transcendental can manifest right before us. By painting the common daily setting filled with an energy, an aura and light of mystical divinity and the connection to Beauty that he experiences in nature, the work communicates that energy to the viewer. Painting the landscape around him brings Masla joy because it allows him to “take things that we might pass by every day and bring them into focus – to see them again as if for the first time.”

See more of Robert’s work on his gallery page here.